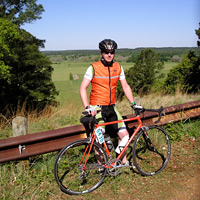 as i’m cooking myself with cathode radiation this week due to the tour de france, i thought i’d re-publish the following rant… in short, a geeky rationalization to avoid purchasing an expensive new bicycle. originally published july 2007. (at right: sporting my new ride and bikehugger kit during the MS150 charity ride from houston to austin this past april.)

on the eve of this summer’s tour de france, i thought i’d ignore the doping scandals for a moment and share my passion for the sport with a little rant on modern bicycle design…

people generally want the latest and greatest. this is especially true of the road racing community (don’t even get me started on triathletes). truth is, we’re all susceptible to marketing departments and those inspirational pictures we see in our favorite cycling magazines. so aside from shelling out some very serious cash, what’s a gearhead with a love of fancy bicycles to do? i’ll begin by delving into why a one-hundred-year-old design remains relatively unchanged.

position is everything
every now and then some really geeky folks ask why new frame designs such as recumbents aren’t adopted by road racers. heck, they are more comfortable and aerodynamic. in addition to subcultural factors and official organizations that idealize tradition over change, the bottom line is acceleration. a traditionally-shaped frame allows one to take advantage of body weight and gravity to more efficiently generate power on those painful climbs…

where am i going again?
the ability to see the road ahead, as well as the rest of the peloton during a race, is also a critical factor here. more experimental and more aerodynamic designs inhibit safety in this regard. i don’t know about you, but when my little computer displays any melon-crushing speed over twenty miles per hour, i want to clearly see where i’m going.

body meets hood
the visibility factor of a bicycle on the road is another issue altogether. when i’m getting hit by a car on a bike (which may have happened a few times over the years), i personally prefer to be on a traditional frame that puts my body a bit higher than a recumbent. not that it makes that much of a difference, but at least i have a better chance of getting up on the hood and away from the wheels. or maybe even being seeing beforehand.

they just don’t make them like they used to
walk into your average bike shop and most likely someone will try and sell you a sexy carbon and/or aluminum bike made somewhere in the far east. you’ll soon discover a nice bike is going to cost you an arm and a leg. now one can make a great bicycle frame from pretty much any material (even a renewable material like bamboo) — but frankly most riders need something more durable than what the top pros are riding (bikes which are built to be raced on for only a season or two at best.) and hey crashes happen… that $3000 carbon frame you were on? yeah sorry it’s toast. oh, that $1000 steel frame i was racing on? yup, i can look into getting it repaired.

the weight obsession
no doubt picking up a lightweight bike with your hands is something that feels good… it’s something you can quantify. keep in mind that the greatest cyclist who ever lived explained: “it’s about 90 percent rider, 10 percent equipment.” now eddy’s little equation here refers to the top levels of the sport… and while that equation may be true for top pros like lemond in ’89, my calculations reveal that most of us are somewhere in the “98% rider, 2% equipment” range. let’s do some math on this one: the difference between a trek madone frameset and the waterford steel frameset with similar componentry is about 4 pounds (not too mention thousands of dollars). that’s quite a bit on the old digital scale — but being that one has to actually ride a bike, let’s not forget to put our body into our equation. when considering a rider weight of 170 lbs, the difference in weight between these frames is slightly over 2 percent. and while i’m no mathematician, we’re really talking about 2 percent of the 2 percent rider factor. as a friend of a friend once said regarding light bikes and your body: “just don’t get the fries with the happy meal.”

sizing up the competition
when you pull up to the start line, it’s never that guy on the brand-new cervelo r3 that you have to worry about. see that crazy old coot on the vintage tommasini? odds are he’s going to kick everyone’s ass — because experience counts for a lot in this sport.

in conclusion, i’m no hater
i’m not some neo-luddite set against new tech and innovation here — i’m just saying we need to get our priorities straight and get back to what simply works best. look at the cost versus the benefit. while fancy and expensive new bicycles are good for the development of the sport (especially at the top levels)… me? someday i hope to be that crazy old guy at the start line intimidating those with much more expensive tastes… and let my legs do the talking.