great design is often loved by some — and hated by many others. but regardless, it provokes. 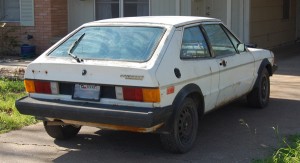 such is the case with my recent purchase of a 1978 volkswagen scirocco champagne edition ii. the amount of surface rust and missing parts really puts the project in project car, aesthetically challenging my neighbors even as it sits covered in my driveway. despite significant issues (the previous owner was attempting to create the ultimate scca race car) and my love/hate relationship with cars due to their environmental impact… i believe it to be well worth saving.

the scirocco was designed by giorgetto giugiaro, named car designer of the century in 1999. from wikipedia:

in addition to various supercars and a laundry list of popular everyday cars, giugiaro has designed nikon camera bodies, computer prototypes for apple and even a new pasta shape called “marille” in 1983.

future plans for my particular specimen include new tires, a non-cracked windshield, an actual dashboard, some seats, and potentially a tdi engine swap to run biodiesel. a ginormous amount of tlc will be required to get it streetable again, but i think i just might be up for the challenge.

one less car in the landfill, particularly if a special and rare design, is a good thing in my book.